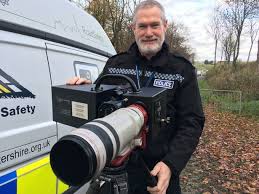 Posted at 10:54h in Latest News by Martin Surl
Facebook0Tweet0

News of the new super long range enforcement camera being used by Gloucestershire Police has gone viral and features in most national and regional news coverage and many trade magazines.

The A417 in Gloucestershire is notorious for all the wrong reason; a motorist being caught driving at a speed of 167mph, horrendous jams and delays, excessive pollution at the Air Balloon junction, dreadful noise from the concrete section and a lamentable accident rate and lives lost.

So the reputation of what should be a really useful and good road is tarnished because for some inexplicable reason the section that s links it with the M5 was never finished  when it first opened in 1997 and successive governments still haven’t got around to fixing it.

Neither I nor the police can fix ‘The missing link’  but what we will do without apology is go out of our way to reduce the speeds, prosecute those who tailgate and make sure those who illegally use their mobile phones end up with six points on their licence.

Some ask, ‘haven’t the police got anything better to do? The answer is ‘Yes’,  so please stop using your phones, drive slower, be safer and more social then they won’t have to spend so much time dealing with the many crashes and fatalities on that road and can get on with catching the ‘criminals’