I fear for local justice… 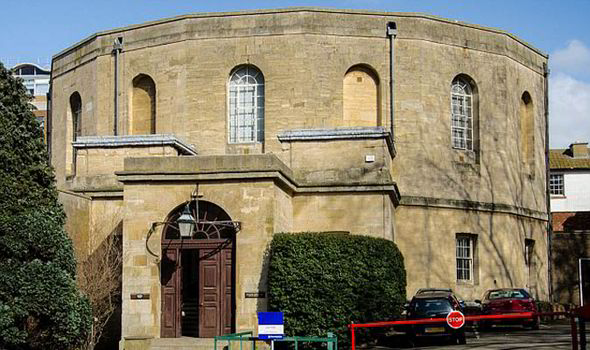 11 Feb I fear for local justice…

Posted at 21:06h in Latest News by Martin Surl
Facebook0Tweet0

A lot has been made of the new investment in policing (acknowledging austerity went too far),  But its not just the police where investment is needed its needed in the rest of the criminal justice system too.

Later this week, I will publish a report into Court provision in Gloucestershire.

This extensive piece of work conducted by staff within the OPCC working with people within our judiciary paints a picture of a system that is creaking.

From cases not getting to court, to cases taking far too long to get to court with facilities that are simply not good enough.

The police are at the front end of the criminal system, but far too often I hear of cases where CPS are not taking cases to court, because it doesn’t meet their threshold … code for they don’t have enough resources and won’t invest in cases where the chance of success in their view is not high enough.

As chair of Gloucestershire’s criminal justice board, I believe passionately that justice needs to be dispensed locally and its integral to making people feel justice has been served.

The new government promised reforms of the criminal justice, but like policing after a decade of cuts, it cannot be fixed overnight.

Tomorrow I will be live with Mark Cummings on BBC Radio Gloucestershire to discuss latest figures which show that sittings at Gloucester Crown Court have been reduced by 50 % , this concerns me greatly and I will make my feelings known.

My greatest fear is our courts are being run down and they might get to such a state in the not too distant future that the powers that be in Whitehall will shut them down and our county will slip of the judicial map. That will mean cases no longer being dealt with locally and that is something I will fight to stop happening. 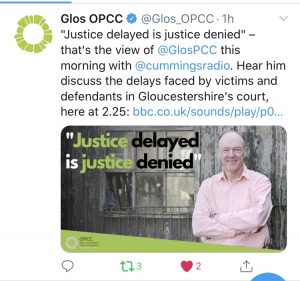