What is happening in the world’s ‘greatest democracy’?

04 Jun What is happening in the world’s ‘greatest democracy’?

To meet this newspaper’s print deadlines * , I am required to submit copy for this column by the Tuesday before publication at the latest. I leave the subject as late as possible to make it topical and stick to local issues to make it relevant.

I was about to submit this week’s offering when the latest pictures of the riots in America following the death of George Floyd appeared on TV. It was easy to see why it was the first story, other than the daily update on coronavirus, to lead our national news bulletins.

What we have witnessed has been truly shocking – and before I continue, I accept that, so far, we have only seen what the broadcasters choose to show us.

Due process must take its course and only then will we get the full picture.

That said, it appears very difficult to defend either events that lit the fuse or the authorities’ response to it.

Why would a police officer do that!?!

Let’s take the incident first. What possessed the officer to kneel on the neck of an alleged offender for eight minutes as has been reported?

Apart from the action itself, he must have known he was being filmed.

He even appears to be engaging with the camera.

But what really disturbed me were the pleas of the victim begging to be released because he couldn’t breathe; crying for his mother fearing he was about to die. 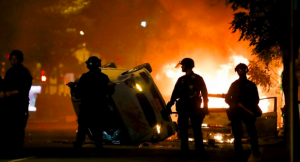 Anger on the streets

Sadly, the response from both sides, has been as violent as it was predictable.

There is no defence for looting and other forms of lawlessness that pass for protest.

It is a familiar cycle and in a country where citizens have a legal right to own and carry assault weapons. 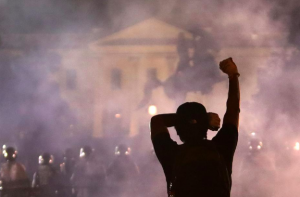 Is there any surprise the police response would be aggressive?

The images of heavily armed National Guardsmen throwing a ring of steel around the White House were alarming.

America may be the World’s greatest democracy yet these are recurring scenes that suggest it continues to struggle to purge itself of allegations of racism.

Would the police officer have acted the same had George Floyd been white?

That is the troubling question that goes to the heart of this.

It is said that what starts in America comes to the UK eventually. Fine for fashion and the arts, but here, where we police by consent, we must all strive together to ensure this is one trend that never takes hold.