My vision for a shiny training centre gets praised by Top Tory. 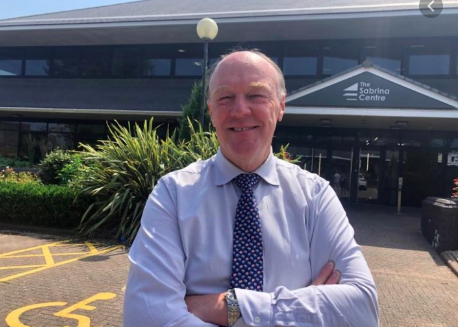 08 Oct My vision for a shiny training centre gets praised by Top Tory.

Posted at 20:15h in Latest News by Martin Surl
Facebook0Tweet0

Yes you read the headline right. I have been praised for my vision and determination to get Gloucestershire Police a new training facility.

The force which is the oldest outside of London has never had its own proper training facility…. it does now!

Yes the role of PCC is about overseeing the police, holding them to account for you, working with the police and partners to make our county safe.

But its also about the long term too.

The police because of what they do, have to work in the here and now, that why the PCC can and should  plan for the future… whether thats pushing for the electrification of the fleet to making sure we have an estate to be proud of.

That’s why I am so proud of the Sabrina Centre.

A training facility for the future

The opening of the Sabrina Centre today (October 8th), the Ancient Romans’ name for the River Severn, marks a special landmark in the 181 year history of the Gloucestershire Constabulary, now recognised as the oldest force outside London.

I  acquired the former laboratory for £600,000 on a 150-year lease, rent-free, from the Nuclear Decommissioning Agency.

Although primarily for the police, it is also designed with commercial potential in mind as a centre for the whole of Gloucestershire to be used by schools, businesses and other organisations.

Work on the Sabrina Centre started in September 2019.

The first intake of students arrived in May when classroom sizes were adapted to meet the Government’s ambition to recruit 20,000 extra police nationally.

It has meeting and lecture rooms, a canteen, gym, parade ground and parking for around 250 cars.

I think it’s great.. but don’t just take my word for it

Today, we had a special guest come to “officially” open the centre.

Kit Malthouse the Policing Minister was a last minute substitute for his boss the Home Secretary Pritti Patel who was due to come, but due to a COBRA meeting she couldn’t make it. She did  however send a video to officially open the centre.

On his visit in the Home Secretary’s place, Kit Malthouse  paid tribute to my vision and the shiny reality…