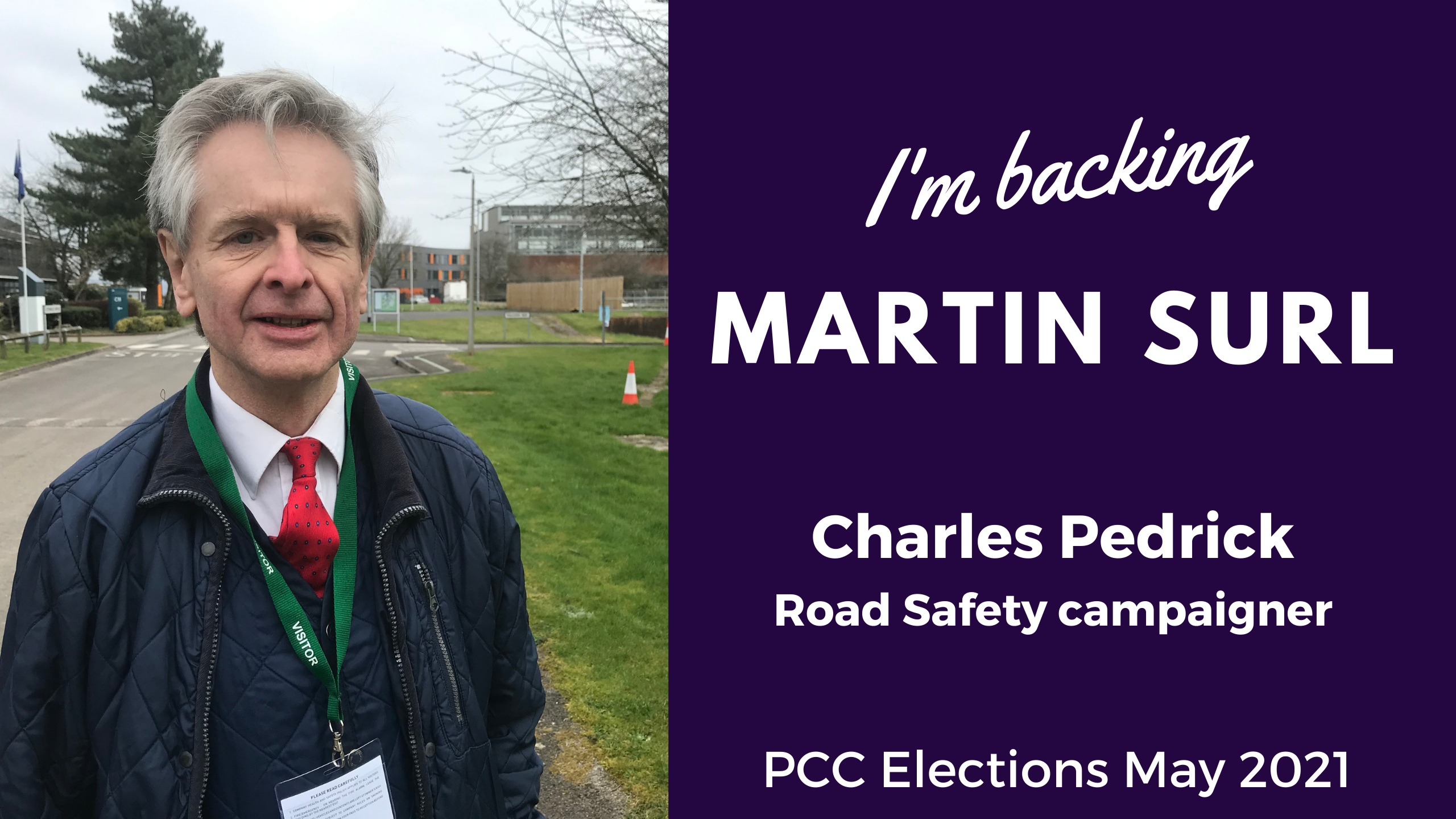 Posted at 09:22h in Endorsements by Guest
Facebook0Tweet0

Speeding drivers are a menace.

They endanger lives and our community was growing increasingly anxious for a solution.

It is not enough to say “We’ve all done it at some time”, it has to stop.

Speeding kills – we know that – but what will you do about it ?

As a local Councillor, I have chaired a well-attended road safety working group every month for many years to explore ways of making our roads safer.

In a 1996 Rodborough Parish appraisal, “Speeding was seen as a problem throughout the parish and speed restrictions would be welcomed by 72% of respondents”.

I was desperate to find a solution but at the time I didn’t have one.

Fed up with being fobbed off

In frustration, after years of not achieving my goal, I wrote to our Police and Crime Commissioner (PCC) Martin Surl though to be honest, I didn’t expect to receive any help.

I could not have been more wrong.

Within days, I received a letter from his PA telling me that Martin would like to come and visit our group and see for himself the problems I had outlined in my letter to him.

From firstly replying to my letter to showing a real interest

He gave up his Saturday and during his visit, we visited many parts of the Parish in Rodborough where he witnessed first-hand, a very serious near miss in the Butt’s area where a speeding driver nearly ploughed into some of us in the group, where there were no pavements.

After our meeting, and starting with a clean sheet of paper, I wrote a technical brief of the system that I wanted to use to stop serial and dangerous drivers from speeding in the built-up areas that we lived in.

I contacted a company in Australia that were specialists in ANPR [automatic number plate recognition] software and our ground breaking project started.

The company had never used radar, which is necessary for the measurement of speed, in their systems so this took many months to design and trial before the new Community ANPR Radar System was born.

There followed years of delays and horrendous procrastination from many bureaucrats but finally, on February 19th 2016, this ANPR system went live and in the first week it recorded 25,000 vehicles speeding on the Stroud A46 in Gloucestershire.

It was headline news in the local newspaper and reported by Sky TV News, BBC24 TV, Radio 4 and many other local, regional and national newspapers. It also made it onto some of the foreign media – and it didn’t end there!

Telephone calls and emails came in from all over the Country, asking for details of the system as it became clear that this was a nationwide problem and that, just like Rodborough, thousands of families were affected by the speeding curse every day of the year.

Hundreds of hours of time have gone into this project and the support of the Office of the Police and Crime Commissioner (OPCC) and seed funding have been instrumental in its success.

They have been inspirational in helping us.

But what is really important to stress is that Martin Surl has, at every stage of this project, given considerable hands-on enthusiasm and support, which coupled with his deputy Chris Brierley, has led to a very strong and invaluable partnership with the OPCC and the Gloucestershire Constabulary who have also given their support.

I cannot thank them enough for their enthusiasm and ‘can do’ attitude.

10 years on, and in partnership with the police, we are now able to target serial speeders.

Intelligence can be stored for up to 18 months enabling us to identify repeat offenders, some of them driving at over twice the legal speed limit in built up areas on narrow roads they share with cyclists, pedestrians and school children.

Sadly road casualties are once again on the increase

For the last five years fatalities have increased in the United Kingdom.

Over 27,000 people have been killed or suffered serious injuries in each of those years leaving their families and friends devastated.

Safer roads has been, and remains, one of the PCC’s policing priorities.

Help given to Rodborough Parish Council by the OPCC in Gloucestershire has now encouraged other Councils to start using this equipment and already it is making their communities safer by helping them control the worst offenders.

When a serial speeding driver is flagged by the system and blacklisted, it automatically sends the data controller an email with the number plate, speed, date, time and GPS and if it is serious enough the driver is visited by a Police Officer. Our records show that once a driver is visited and shown the data he or she conforms to the speed limit in approximately 95% of the cases that we have monitored over a two-year period.

We consider this a staggering success story and the icing on the cake came in December 2020 when the system received the Surveillance Camera Commissioner’s accreditation for conformity.

In his latest report, Her Majesty’s Inspectorate of Constabulary, Fire and Rescue Services (HMICFRS), stated: “There is a clear, and pressing, need for government, police and crime commissioners, chief officers, and the College of Policing to recognise the importance of roads policing in reducing death on the roads.

“A lack of co-ordination hinders effective engagement with the public and partners.

“In addition, to the tragic loss of lives, the financial cost of all road traffic collisions (including those that go unreported) is estimated to be around £36 billion per year.

Along with the tragedy comes the cost

In one year alone, the estimated cost of motorway closures was £1 billion. But some forces are failing to recognise their part in making the road network safe and efficient; and how best to work with partner agencies that have a shared responsibility for road safety”.

With over five people being killed every day, [27,000 killed or seriously injured every year] it is now time for others to follow the example of our OPCC in taking this subject seriously.

We cannot thank both Martin Surl and Chris Brierley enough.

By acting proactively, they were supporting this project even before the HMICFRS made it a requirement.

The system that was conceived following that first meeting with Mr. Surl is not only reducing serial speeding, it is now also being used to help the Police gather intelligence in the fight against other serious crimes making our communities safer in more ways that one.