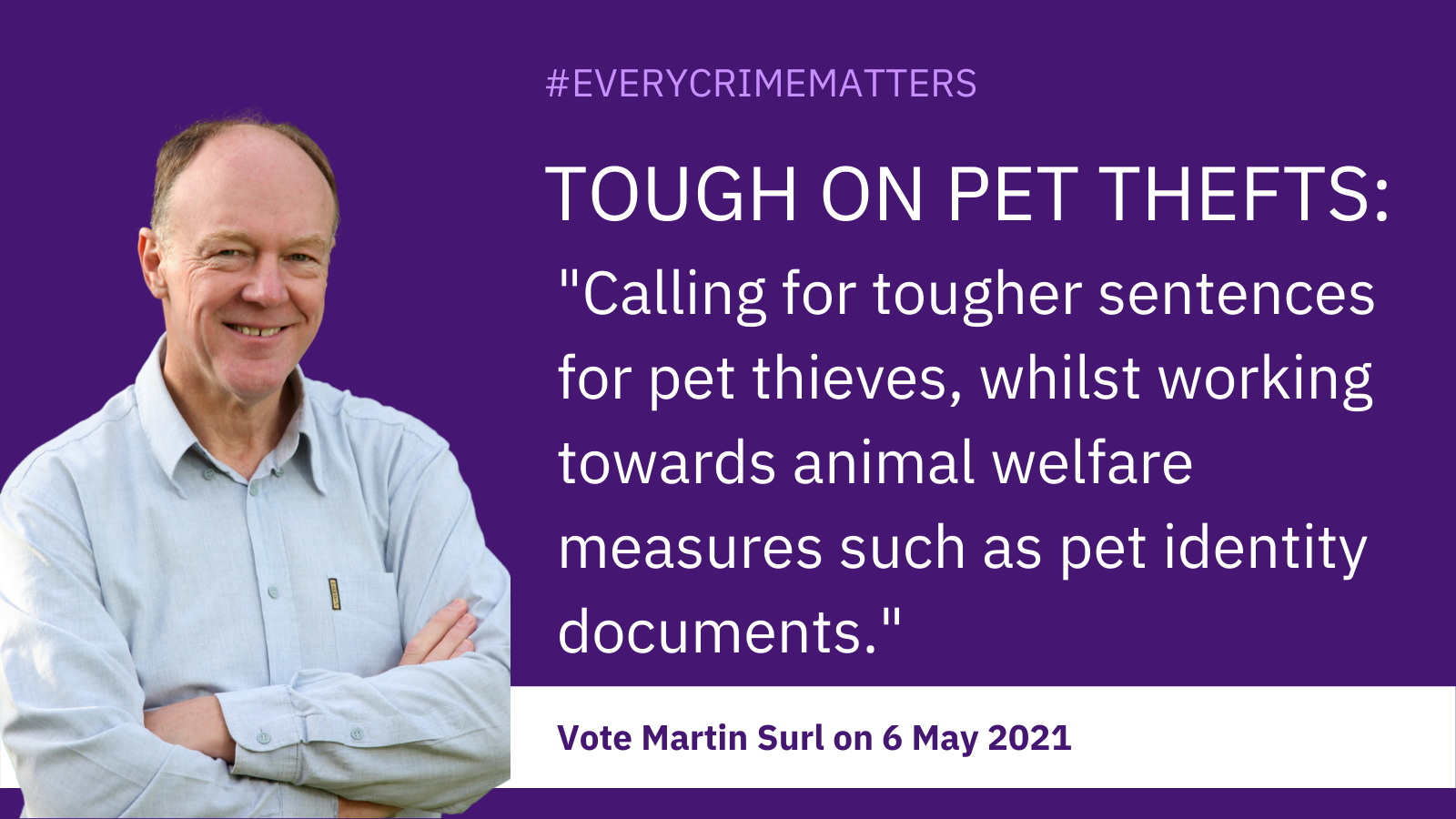 Posted at 06:30h in Latest News by Martin Surl
Facebook0Tweet0

As an animal lover and dog owner, I understand the heartbreak of losing a family pet and I abhor the opportunist increase in dog theft that has evolved during the pandemic.

Of course, penalties for offenders should be more severe to act as a deterrent to the illegal trade of our companion pets, but tougher sentencing is not the quick fix some infer, nor would it be of particular benefit to our four legged friends.

It’s not just about new laws

“A Compassionate Approach” has been in my Police and Crime Plan since 2016.

I was an early supporter of Finns’ Law which was introduced in 2019 to give greater protection to animals in service.

I believe the wider welfare of animals should be at the heart of the solution and my record shows it is a cause I have championed for some years.

Gloucestershire played a key role in producing a much improved welfare programme for service animals alongside which my office manages an Animal Welfare Independent Visitors Scheme.

Working in partnership with the Dogs Trust, it allows independent members of the public to visit police dog training centres, accommodation and police stations to observe, comment and report on the conditions under which police dogs are housed, trained and transported.

Pets are part of the family

I have also been at the forefront of the campaign to have companion pets regarded in law as ‘sentient beings’ rather than objects.

“A Compassionate Approach” is not an election gimmick, it is embedded in my policing strategy and I am pleased to say the Constabulary is committed too and has now enlisted the support of a wide range of professionals and volunteers across the county.

My ethos has led to action

For while taking a suspect into custody might be all in a day’s work for police officers, their training does not extend to dealing with a frightened, possibly malnourished and ill-treated, litter of puppies.

Now, thanks to our “Compassionate Approach” policy they can call upon:

All of this is due to work that has been going-on for many months and in some cases years. As a result, West Mercia, the national police lead on dog theft, has praised Gloucestershire for doing more than other force in this area.

One example of this is the charging of a 24 year old man from Durham who was arrested after a van, allegedly containing more than 30 puppies, was stopped on the M6 last August.

He was originally arrested after a member of the public reported seeing dogs being loaded into the back of a van in Charlton Kings near Cheltenham.

And, following a similar operation near Gloucester in February, more than a dozen dogs were seized and taken into protective custody before many of them were found news homes.

“A Compassionate Approach” is embedded in the Constabulary’s corporate strategy.

It is the least all animals deserve.