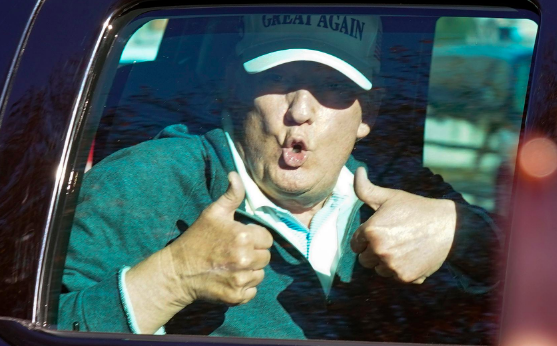 Posted at 08:15h in Latest News by Martin Surl
Facebook0Tweet0

Lies damned lies and statistics, its been the running theme from one of the PCC candidates in this years election* (and also last years postponed election).

The willingness to simply trot out facts and figures, without any context, painting a negative picture of our county, in an apparent effort to win votes seems to fly directly in the face of one his election ‘pledges’ to ‘stamp out spin’.

It feels something akin to the Trump play book of politics where people are quite happy to fan the fear of crime for political ends.

My promise to you has always been to tell the truth and be honest.

I have never dodged an interview or any attempt by the media or my peers to hold me to account.

If I am re-elected on Thursday (results will not be known till Monday 10th), I pledge to continue with that ethos of being open and honest as I have since being elected your first independent Police & Crime Commissioner in 2012.

So in this blog, I want to outline some of the claims / statements made and give you the full context:

I would ensure Gloucestershire gets its full uplift allocation, by delivering on my pledge of 300 more officers/PCSOs (this pledge keeps changing from 300 PCs, to a mixture now of PC’s PCSOs / Specials).

Plus – he likes to mention that another force have recruited 200 extra officers, so it is possible. Problem with that comparison is that, that  force is now considering making a load of redundancies with experienced police staff expected to lose their jobs.

If all goes to plan, by 2023 the number of officers will have increased by 230, but it takes between 2/3 years to train them so that those recruited in 2023 would not be fully trained until 2026 – still 29 less than the Constabulary had in 2010 and 79 of which are now paid for by you, through your council tax, not the government.

The annual cost of 150 locally funded PCs would be an additional (circa) £13 million, the equivalent to an increase of 21.7% council tax (£55.80 increase on the current Band D).  Double it for 300 additional officers.

(You would also need to add in some extra for vehicles, radios and extra trainers…)

We have the highest rate of residential burglary in the South West ..

Here are the full facts and context:

Nationally the reduction was 9.6 % compared to 21% in our most similar forces and 28% in the South West.

Gloucestershire has historically had higher rates of burglary – that is why the OPCC & the force have in recent years promoted the WIDE campaign which is now seen as best practice.

Crime in Gloucestershire has gone up 5 % over the last year, while across the country it has gone down 7 %

Most recent data from the Home Office shows the following:

All crime comparing 2020 with 2019 has Gloucestershire down by 33.7 %; 35 % in England & Wales and 36 % in our most similar forces (MSF) . That difference can be attributed to the work done by the force to improve crime data recording.

Taking a longer term look at all crime in the county …

Over the last decade (2011-2019)* crime has gone up across England and Wales without exception.

Gloucestershire, in fact, has the second lowest rise in crime in the whole country.

Only Thames Valley has had a lower increase than Gloucestershire.

Compared to our South West counterparts…

(Because of Covid, and to be more realistic, we have used 2019 rates as crime decreased across the country in 2020)

The average increase in the South West was 38 %, in Gloucestershire it was 31 %, across our most similar forces where the increase was 43%.

The average increase for England and Wales was 57%

(Because of Covid, and to be more realistic, we have used 2019 rates as crime decreased across the country in 2020)

Over the last decade (2011-2019) crime has gone up across England and Wales without exception.

Gloucestershire in fact has the second lowest rise in crime in the whole country.

Only Thames Valley has had a lower increase than Gloucestershire.

The average increase in the South West was 38 %; in Gloucestershire, the increase was 31 %; across our most similar forces it was 43%.

The average increase for England & Wale was 57 %.

The rate of anti-social behaviour (ASB) in Gloucestershire is over 30 % higher than the national average.

Whilst we do have higher rates of ASB, this also needs to be given some context.

One of the reason our rates of ASB have been higher historically is because of the way it is recorded in Gloucestershire.

The category has become a bit of a ‘catch-all’ so this last year, offences relating to Covid regulations will be recorded as ASB.

Already we’re seeing ASB figures fall as the Constabulary’s work around crime data reporting is taking effect. However, this has resulted in rises in such crimes as public order & violence without injury e.g. threat via facebook.

According to the Crime Survey for England & Wales – residents in Gloucestershire actually don’t perceive there to be a particular problem with ASB. But that is not to say we’re complacent.

We want to know why experience and perception is so different. Work is being done across partners to look at how we can collectively deal with ASB better because ASB is not just a statutory responsibility of the police but of many organisations including local councils and the fire service.

Figures from the Office for National Statistics (ONS) comparing 2019/20 with 2011/12 – show Gloucestershire with a 36 % reduction, 46% across most similar forces and 53% across England and Wales

The cost of rural crime being referred to is based on a National Farmers’ Union (NFU) survey of NFU insured farms in 2019.

What it doesn’t do is provide actual crime rates or the actual return rates of people who filled in the survey.

So whilst it is useful in giving a viewpoint, it cannot be seen as a true indication of crime. 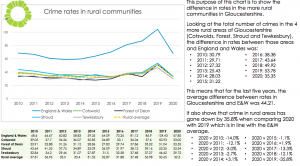 Both the NFU & Country Landowners’ Association (CLA) have praised Gloucestershire Constabulary for achieving the hallmarks of what a good force would put in place to deal with rural crime.

Not 4 times the crime rate at all. In fact our rural areas remain some of the safest places in the whole country.

Complaints – claimed one of the highest rates in the country with second highest allegations per 1,000 employees 2019/20

Time taken to record cases within 10 day KPI is getting longer- 20 % longer than the national average.

It takes well over 4 months.

Unlike many other forces – our force has historically chosen to record the actual complaints received as opposed to a complaint.

Eg. One letter with five complaints gets recorded as five separate complaints.

Which is actually what the IOPC would prefer and recommend.

The date also refers to 2019 data. Since then investment has been made into a service recovery hub, so a customer care team are dealing with lower level service recovery type complaints quicker. This was in its infancy in 2019, so we expect the figures will be better next time around in terms of timing.

Facts and figures taken out of context can be made to fit any narrative.

Whilst I accept I am not perfect, I think with the decade of cuts enforced on us from Whitehall we’ve done alright in Gloucestershire.

A month or so ago, my office prepared a report to explain to councillors on the Police & Crime Panel the crime situation in the county.

To give them the full facts and figures, no spin or waste but clean data from the last decade.

The same report was given to all the candidates standing for PCC.

So there is no excuse for them being  economical with the truth.